“With free enterprise, this country offers a lot for people, regardless of ethnicity. Nobody ever stopped me from going to college. I’ve started two businesses in my life and no one ever stood outside my door and said, ‘Hey, you can’t go to work this morning because you’re black and you can’t start a business.’”

The owner of a construction company, Burnett said he feels he is being led to speak out more against the woke culture pushing black victimhood and Critical Race Theory in schools.

The media, he said, are shunning stories of hard-working, successful, black people like him who reject the agenda of Black Lives Matter and Critical Race Theory.

“I was looking for something like TakeCharge and so I put in a request to get in touch, and [TakeCharge president] Kendall Qualls gave me a call,” he said.

We reject socialism in all shapes because it deprives individuals of their personal value, robs them of their unique contributions, & values them only as a member of a special group. It is through the private sector that we can create wealth.

Burnett reflected on how the protests, violence, and destruction that have been a hallmark of the Portland area for over a year stirred something inside of him to reach out for something different. 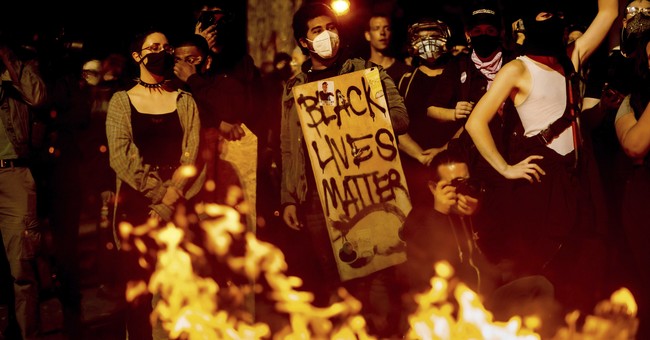 “We’ve had some really high profile school districts that have been very vocal about Critical Race Theory (CRT), making sure they really pushed Black Lives Matter in the public schools,” Burnett said, noting his wife has been a public school teacher for 16 years:

This year, with COVID, she was teaching from home, so she had her office and was teaching class online while I had my office next door. And I would start to hear these trainings that they were making the teachers go through. And that really caught my attention. I knew a lot of this was going on, but it got really intense after the George Floyd protests, and a lot of it just caught my attention because it just didn’t seem right.

In those CRT teacher trainings, Burnett said he heard “odd” statements, including some asserting math is “racist.”

“That just seemed really strange,” he said. “Of all things, what do you mean math is racist? But, it came across as if we can’t expect black people to do math.”

Burnett said he heard statements along the lines of, “Their culture isn’t built on preciseness,” and similar demeaning comments.

“I’m thinking, they can’t be serious about this!” he exclaimed. “Black kids won’t be able to become architects or pharmacists or anything like because you need math skills for those jobs and many more.”

Burnett said he came to understand there were a lot of white teachers in the school district suddenly talking about “white privilege” and “how to be anti-racist.”

“And now, they’re all speaking for black people and, you know, the joke was I kept telling my wife, ‘Do you think I could pop in for an impromptu talk?’”

You know, wouldn’t it make their heads explode if I actually said, “Hey, wait a minute, you know what? We’re not all oppressed. I know that’s what you think.” But, I don’t think they would ever invite a black person like me to talk – it is not what the media wants to hear. So, yeah, a lot of things caught my attention, and Portland seemed to be right in the middle of all this craziness.

Burnett observed that, in addition to the narrative that “math is racist,” is another that attempts to sell the idea that having traditional two-parent families with a father and mother raising children together is somehow a “white thing.”

He explained that a white woman, a former teacher, who recently ran for the school board in Beaverton, built her campaign on the theme of “kids over politics,” and bringing back “traditional values in schools.”

Burnett said things became “crazy” when she was “hit with the racism label because her opponents said traditional family values or traditional American values was racist.”

“What is racist about that?” he cried. “What? Black people don’t have traditional family values?”

He said this was the point at which TakeCharge caught his attention.

“There’s almost this push that, for black people, the disruption of the family is like a given, or it’s encouraged, or, you know, to say black people – Mom, Dad, kids, married families – somehow they’re not involved in that,” Burnett laughed. “That’s a white thing, and you’re called racist for encouraging the traditional family because it, it shows the kids that are brought up in that kind of situation are miles ahead of other kids.”

Restoring and preserving the nuclear family is important. Watch this great, local example of parents speaking up about how BLM wants to tear families apart. Have you spoke at your school board meeting? https://t.co/lhUG0O1Jtb

Burnett said he believes that, among blacks, there is pressure to “do certain things to be black – otherwise you’re not.”

But, you know, I find it funny that it doesn’t bother me to speak my opinion. And you have this thing where you’re in a circle of people talking, and lots of times if I speak up, I’ll have pushback against me. But, then, after the crowd has gone away, you always have people that kind of look around to make sure no one’s listening. Then they kind of look and say, “Hey, you know what, yeah, I kind of feel the same way. There are a lot more of us than people realize.”

Burnett encouraged TakeCharge to continue spreading their message because it will be well received in the black community.

When and Why Did Washington’s Views on Slavery Change? A Woke City Wakes Up