Critical race theory is a topic that has swept across our nation and state, with many Minnesota public schools attempting to implement its teachings into curriculum.

Alpha News has covered many stories of the parents, students, and community members who have stood up against critical race theory, speaking at school board meetings and creating groups to warn others about the dangers of teaching this to children.

Now, Alpha News is proud to sponsor a program that will feature a discussion with critical race theory experts. The program will be put on by The Patriot, a local Minnesota radio show.

The panel featured on “The CRT Report Card” will include President of Take Charge MN Kendall Qualls; Headmaster of Liberty Classical Academy Rebekah Hagstrom; Catrin Wigfall with the Center of the American Experiment; and Alfrieda Baldwin from Take Charge MN.

These experts will introduce critical race theory and answer questions along the lines of “How did we get to this point?”; “Who is pushing this topic?”; and “Is this really about race?”

You can read about pushback on critical race theory in Minnesota at alphanewsmn.com.

Minnesota Business Venture is a four-day virtual experience where high school students learn business, career, and financial literacy skills through a business plan project. At the end of the experience, students present to a panel of judges, akin to the Shark Tank experience on TV. It’s a great opportunity for high schoolers to learn career skills while in a fun camp environment. We offer keynote speakers, interactive breakout sessions and small team meetings.

The breakdown of family and rebuilding families as a strategy 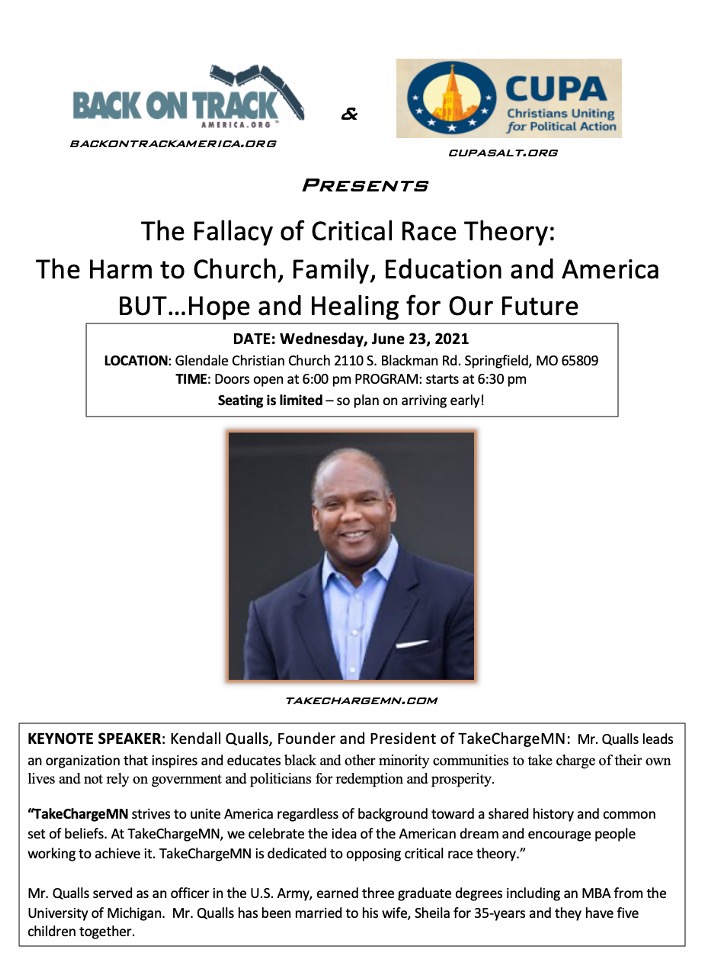 The Fallacy of Critical Race Theory: The Harm to Church, Family, Education and America BUT...Hope and Healing for Our Future

Wednesday, June 23 presented by Back on Track America.org and Christians Uniting for Political Action

Thursday, June 17 presented by Debbie Georgatos, America, can we talk?

Keynote speaker at Liberty Tea Party Patriots – Fighting back against Critical Race Theory and Returning to Cultural Roots of Faith, Family, and Education

Presented by former CD3 candidate Kendall Qualls, President of TakeCharge (MN), on how to reshape the black community, denounce Critical Race Theory with facts, and show Progressives are responsible for a two-parent disparity.

Learn more about TakeCharge on Saturday, April 3 at 11am CDT
Request a Speaking Engagement