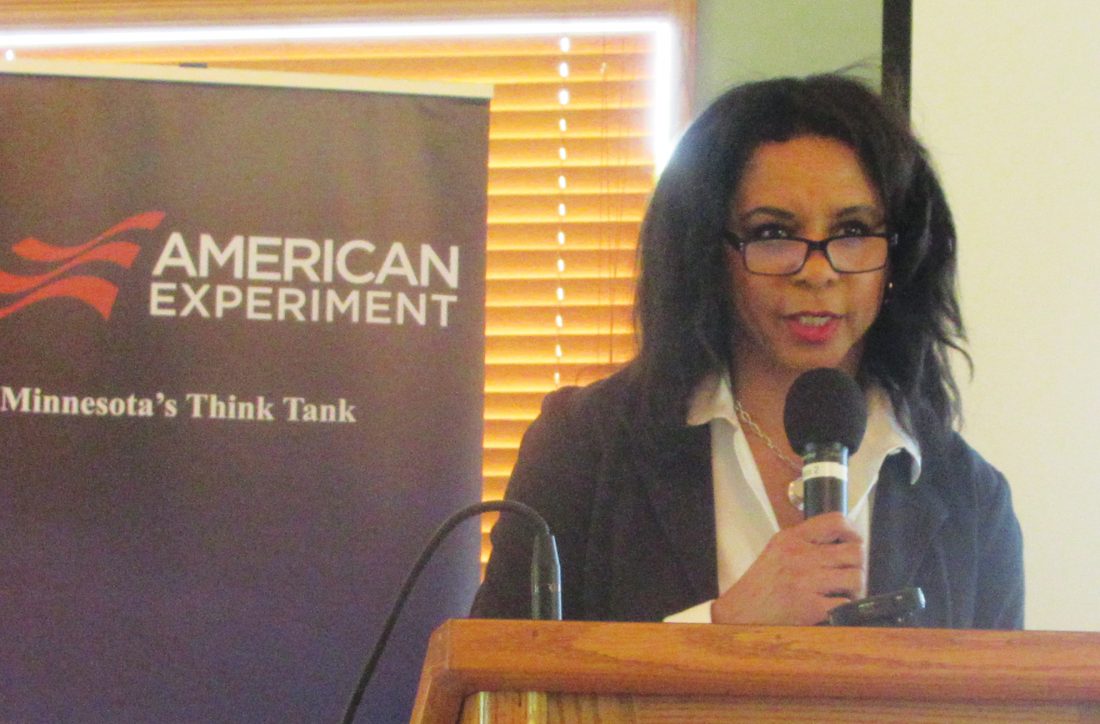 Photo by Deb Gau. Sheila Qualls, a speaker with the conservative think tank Center of the American Experiment, addressed an audience at the Marshall Golf Club on Thursday. Speakers at the event claimed “critical race theory” was affecting Minnesota schools.

MARSHALL — Marshall Public Schools teachers said this week that “critical race theory” isn’t a topic that gets taught in their classrooms. However, speakers at a Thursday event claimed that wasn’t necessarily true.

“They probably wouldn’t know what it is because it’s constantly being rebranded as something else,” she said.

She went on to encourage area parents to listen for “code words” for critical race theory including “Diversity, Equity and Inclusion,” “ethnic studies,” “anti-racism,” and “social emotional learning.”

Sheila Qualls and her husband, Kendall Qualls, founder of the group TakeCharge Minnesota, both spoke Thursday at the Marshall Golf Club. The presentation was organized by the Center of the American Experiment, a conservative Minnesota think tank.

The Qualls told area residents that critical race theory wasn’t a civil rights movement or an idea only discussed in law schools, but an attempt to “weaponize” children and force change on society.

“There’s no Martin Luther King in front of this thing,” Kendall Qualls said. “It’s a far-left agenda to undermine our country.”

The response from the event’s audience of about 100 people was mixed. There were no audience questions taken during the presentations. Part of the audience gave Kendall and Sheila standing ovations, while other audience members said they left the talk feeling concerned.

John Coulter, a retired teacher from Tracy, said he thought critical race theory was something people needed to examine.

“I just feel this critical race theory thing is dividing us,” Coulter said.

“The idea that you’re telling someone that they’re a victim, that’s wrong,” he said.

Joan Gittens said she was disappointed that there was no opportunity for audience questions.

Rick Herder, a communications studies professor at Southwest Minnesota State University, said it was hard to take the speakers’ claims seriously because they did not provide evidence.

“My concern is, I asked if they could provide any peer-reviewed evidence of the dramatic claims they are making,” he said.

Sheila Qualls said critical race theory views everything about American society through a lens of race, and divided people into two groups: oppressors and the oppressed. She said CRT also “contains an activist dimension,” instead of just seeking to understand society.

Qualls claimed critical race theory had found its way into the draft for Minnesota’s new standards for K-12 social studies education. The first draft included “political correctness” while leaving out important historical events like World War II and the Holocaust, she said.

A new draft was released this summer, “after feedback from a lot of Minnesotans,” Qualls said.

An F.A.Q. posted on the Minnesota Department of Education’s website says critical race theory is not part of the proposed social studies standards. But Qualls said the new draft still lacks important content and includes a heading of “ethnic studies.”

The second draft of new proposed social studies standards includes learning benchmarks in ethnic studies, as well as topics like government, economics, geography and history. Examples of proposed ethnic studies benchmarks at elementary school grade levels include goals like being able to describe how a person or group in the past worked to make things fairer for people, or explaining how stereotypes can affect people.

Benchmarks for middle and high school students include goals like learning about Native American cultures and history, examining the impact of slavery and race in Minnesota, and learning about different freedom movements around the world.

While the bad parts of U.S. history can’t be changed, Qualls said, “We don’t hear how far we’ve come in race relations.”

Kendall Qualls spoke about his life and his work with TakeCharge Minnesota. Instead of blaming systemic racism, Minnesotans should be focused on school choice and strengthening the two-parent Black family, he said. Qualls said government aid programs like Aid to Families with Dependent Children (AFDC) in the 1960s gave a financial incentive for unmarried mothers to remain unmarried.

Sheila Qualls said there were ways for area parents to take action against critical race theory. Parents could review their children’s curriculum and textbooks, talk to teachers and work their way up to school officials. They could also run for school board positions.

“Don’t be afraid to pull your kids out of public school,” she said.