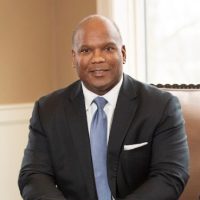 Mr. Qualls has a unique vantage point to convey the TakeCharge message and to plant the seeds of change desperately needed in the Twin Cities and across the country. During his childhood, Mr. Qualls lived with his divorced mother and siblings in public housing projects of Harlem, NY in the late 1960s. Before middle school, Mr. Qualls was separated from the other siblings and moved in with their father in a trailer park in Oklahoma. Neither of his parents finished high school. Despite the challenges and turmoil of his early life, Mr. Qualls worked full-time to pay his way through college, served as an officer in the U.S. Army, earned three graduate degrees. He worked his way up the ranks to become a vice president at several Fortune 100 healthcare companies.

Mr. Qualls champions the principle of meritocracy and supports the notion that free enterprise, and the private sector are the fastest and most equitable way to lift people from poverty to prosperity including black Americans. He also is a champion of religious freedoms, a core tenant of America’s foundation. Mr. Qualls has been married to his wife, Sheila for 35 years and they have five children together. He was a mentor at Minnesota Adult & Teen Challenge. He serves on the Board for Lundstrum’s Performing Arts Center in North Minneapolis as well as Hope Farm School, a school for at-risk boys from Minneapolis.

Sheila is the Executive Director of TakeCharge.  TakeCharge strives to unite Americans regardless of background toward a shared history and common set of beliefs based on notion that the promise of America works for everyone regardless of race or social standing.

Prior to TakeCharge, Sheila was a national speaker on the topic of marriage and families.  She also was a blogger and personal coach.  Sheila wrote at Patheos.com.  Her published worked also appeared in the Upper Room, the MOPS Blog, Grown and Flown, and the Minneapolis Star Tribune.

Sheila’s father was born in Memphis, Tennessee, in 1929 making her one generation removed from the Jim Crow south era.

Sheila earned dual bachelor’s degrees in English and Journalism for Cameron University and a Master’s of Art in Communication from the University of Oklahoma.

Sheila and her husband, Kendall, have been married for 36 years. They have five children and a black Lab named Largo.

Alfrieda Baldwin, Chair of the Board

Alfrieda is a Chicago area native. A retired attorney, she was in-house counsel at Securian Financial for 32 years. After retirement, Baldwin started volunteering in her school district. Being with elementary students caused her to reflect on the education she had received while attending a Lutheran grade school. It led her to want to start a Christian school accessible to families of all ethnic and financial backgrounds.

Mr. Hines was born and raised in Chicago, IL. He served in the United States Marine Corp as a military musician prior to attending college. Upon completion of his active military service, he graduated from the University of Minnesota’s Carlson with a Bachelor of Science degree in Business Administration with an emphasis in Finance.

During his 30 years as a Sales Management executive for Cargill Incorporated and Land O’Lakes, his passion to give back and develop others led him to numerous volunteer opportunities and leadership roles. Mr. Hines is an engaged member of the community and enjoys investing, reading, golfing, cycling, and cooking. As a recent retiree and widower, Mr. Hines values life-coaching and spending quality time with his adult children.

Ms. Napper is the owner and Chief Creator at Taurus Moon Graphic Design, LLC, providing graphic design services to small businesses, non-profits, foundations, and global corporations. Her passion is presenting information visually, in a clear and compelling way. She served on the board of PFund Foundation from 2006-2012.

Ms. Napper earned her bachelor’s degree in International Business, with a concentration in Marketing from American University in Washington, DC. Born and raised in Philadelphia, PA. Ms. Napper’s parents gave her and her siblings a solid moral foundation through faith in God, love of family, the importance of a strong work ethic and the value of a good education. She and her husband live in South Minneapolis.

Andy is a former executive with Sleep Number Corporation in Minneapolis, MN where he served in a variety of senior management roles from 2008-2019. From 2016-2019, Andy held the number two role in the company serving as EVP/Chief Sales and Services Officer. In this role, he was responsible for $1.6b in store and online sales revenue, customer promotions and financing, retail operations and training, and the retail real estate/ market development of 600 stores across the country. He was also responsible for key service areas such as nationwide home delivery and set-up. He led 3500 team members across all 50 states.

Peter is the former Chair of the Metropolitan Council, which is a cabinet-level position appointed by the Governor. Prior to his position at the Metropolitan Council, Peter was executive vice president of Publishing & Educational Services (PES) at the Hazelden Foundation in Center City, Minnesota. Before joining Hazelden, Peter was the cofounder and, for 15 years, executive director of the Institute on Black Chemical Abuse.  He was appointed to serve on a commission to the White House Conference on a Drug-Free America.

Robert Carter is the founder and retired CEO of Summit Mortgage Corporation. Summit Mortgage is a Minnesota-based company with a national presence that has been in operation for over 30 years.  Philanthropy has always been important to Bob as significant corporate profits have long been directed to a family foundation.  Foundation gifts have focused on supporting education initiatives, particularly those that reduce minority education gaps, improving access to clinical trials that can advance medicine, and providing help for food and housing insecurities.

As the founder and sole shareholder of Wyncrest Capital, Mr. Eibensteiner has been a very active investor in the health care, telecom and software space for the past 35 years. He currently serves on the Boards of the following companies: Miromatrix, Inc., an organ regeneration biotech firm; ReadyCredit, a provider of store value cards for the transportation industry; Kwikbit Inc., a wireless broadband provider for the telecom industry; Integrated Medical, Inc., a medical device engineering firm; and Aleran Software Inc., a cloud-based management software company for the retail industry.

Mr. Eibensteiner currently serves as Chairman of the Center of the American Experiment, a public policy group in Minnesota dedicated to solving some of our nation’s most pressing issues and holds a Bachelor of Science degree in political science from the University of Minnesota.